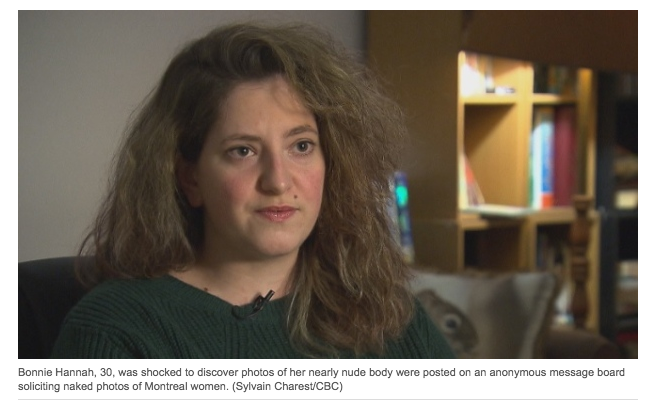 Imagine you are going about your life and then one day, out of the blue, CBC calls telling you there's a semi-nude photo of you being shared around the internet.

That's what happened to Bonnie Hanna:

"[She] had no idea there were revealing photos of her posted publicly on the internet until CBC News contacted her for this story. Her nearly nude image is among dozens being traded by strangers.

Anonymous people speculate about her ability in bed. One offered cash to anyone who could snag a photo of her completely naked."

Hanna's story, and the story of all the women who are harrassed online and try to find some form of protection and justice, is another illustration of how our justice system is not equipped to deal with this kind of threat to someone's personal security and right for privacy"

"From a criminal law perspective, police have tools at their disposal to track online activity. A 2014 law gives police additional power to investigate cyber intimidation cases.

The law makes it an offence to share nude or sexually explicit images without the subject's consent. Anyone convicted could face five years in prison.

What do you do  if you can't prove who is uploading the photos or control who is downloading them? Hanna's photo was on a site dedicated to these kind of photos of women. I am willing to lay money on the fact that none of them gave their consent.