Tara Bradbury vs. the Trolls

Home / Tara Bradbury vs. the Trolls

(Thanks to Lynn Verge for the links!)

A story from St. John's made the National news last week when a journalist Tara Bradbury received misogynist hate mail simply for covering a local Feminist festival. She responded by writing about the experience. Especially noteworthy was the support from her editor and the larger community. Here is a timeline in articles for your perusal:

August 22: The St. John's Telegram. Tara Bradbury: Hate, misogyny and sexism -- all in a day's work

"Every reporter is used to trolls and negative comments on their stories, and it’s generally not a big deal. But there are a few things that make this situation particularly concerning for me. The fact that the article was a simple event-advancer yet it stirred a burning anger in some men that they just couldn’t hold back is disturbing. The fact that most of the guys hurling the abuse used their real names, showing a passion and conviction in their argument that’s not there with anonymous comments, is unsettling and shows the depth of their misogyny. I don’t think they even realize it’s there."

“At its root cause, I believe a hatred of feminism is just a hatred of women,” said Jenny Wright, the executive director of the Council. “There are trolls and harassers and (men’s rights activists) who spend their whole time looking for the hashtag ’feminism.”’

Social media can be a hostile environment for people talking about feminist issues, including reporters, Wright said. She says the attacks she receives on Twitter can be so violent, she has considered giving up the platform altogether.

Bradbury said the backlash fits into a pattern of harassment she has experienced over her 13-year career at the daily newspaper, which can include reactions bordering on threatening.

“These commenters don’t realize how ironic they’re being,” Bradbury says. “They’re proving the point of why we need a (feminist) festival.”

"I hoped — and I’m confident it has — the piece pushed some buttons and made more than a few think differently.

Some unhealthy and nasty remarks were expected, too. They always turn up in this day of anonymous trolls and online arseholes.

What I didn’t anticipate was that some commentary would be so crass and crude, that it would sink to the level and ignorance of a Grade 6 boys’ locker room.

It’s 2016 for most of us, but sadly, still the mid-Paleolithic period for far too many.

There were a lot of supportive comments, but too many crossed the line." 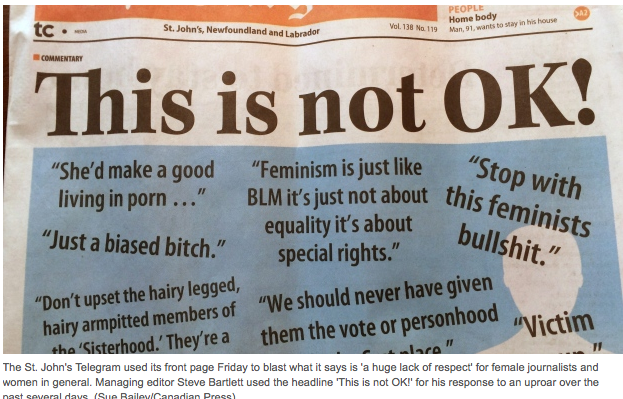 White, a former web editor for VOCM, has herself dealt with such issues both through her work and her own feminist blog.

She says people have to realize that it's not just an issue for women to overcome or deal with. She says it's everyone's responsibility to stop the abuse.

She says she found herself being "accused" of being a woman.

There would be comments that would say "I can't get my comment through, the moderator must be a woman." She says it's everyone's responsibility to prevent hateful speech from going through, not only because it was her job."