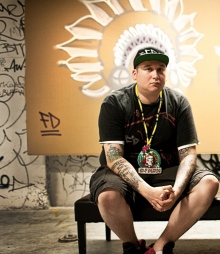 Ian Campeau's daughters inspired him to reexamine his playlist. (ATCR/Facebook) VIA CBC website

I just heard this on CBC and thought I would post it.

Here's a sample of  Ian Campeau's explaining his decision:

This re-examination of what he listens to at home and what he plays onstage was largely inspired by Campeau's own young daughters.

"It's more realizing that my daughters don't have the same opportunities that I have as a man, and it's really easy to want to change that," he said. "Men don't need to hate my daughters because they're women."

It is a quick clip, but worth a listen.